Jonathan, an Attender at Redland Meeting since a young age but more recently living in China and Australia, writes of his experience of running the Melbourne Marathon:

I don’t remember exactly when the dream of running a marathon first occurred to me, but I remember being very young and it’s certainly been a dream I’ve had for over 20 years. I can remember watching transfixed as presenters would run the race on the British TV show ‘Blue Peter’ and thinking what an incredible accomplishment it would be but couldn’t realistically imagine myself actually doing it. At University in Plymouth I devised a 7-mile route that I would occasionally run and felt pretty pleased with myself whenever I ran this “epic” route. The notion of running a marathon felt pretty remote back then!

At that point running wasn’t really a passion for me. It was mostly something I did as a cheap way to keep fit. I think because the concept of running 26 miles (42km) didn’t seem possible or easy to grasp running didn’t take a hold of me back then. That all changed, however, when I came to Australia. My sister and brother-in-law, Clare and Dave, recommended a group to me called ‘Manly Beach Running Club.’ I really wanted to give it a go but was nervous beforehand. A “running club” sounded very serious indeed and a whole new level to what I was used to at that point in time. I pictured a group of people practising their cricket shots and doing big, extravagant stretches as they athletically paraded around the beach. They would call each other “Smithy” and names like that and say things like “come on guys, let’s smash him on the first lap” the moment they saw me. What a ridiculous idea, and of course I was proved completely wrong! MBRC is a wonderful, friendly and nurturing club where dreams are made. We all look out for each other and there is an amazing energy to feed off.

As a result of this feeling I quickly settled into a routine of running. Well of course you go running at 5:30am! Why wouldn’t you? With two half marathons in the bag, my coach Joe asked me if I had any other races planned for the future. I said I wanted to do a marathon. I was very clear that I would only do it if Joe gave me the green light. He soon messaged back to say that sounded like a good plan. My emotions were split at this point; excited to finally start training for this huge event, but also nervous as I hoped I wasn’t about to bite off more than I could chew. At that point part of me wished Joe had said no but mostly I was happy he hadn’t! Joe has been a wonderful mentor to me since I began running with MBRC and has provided me with many a nugget of wisdom, for running and life in general really.

For the most part I was happy with how my training went. There were the odd couple of weeks when motivation was a bit lower or I felt extra tired but I am lucky in that I have always been determined to see something through when I have my heart set on it. I was also enjoying the sensation of feeling the fittest I’ve ever felt in my life. 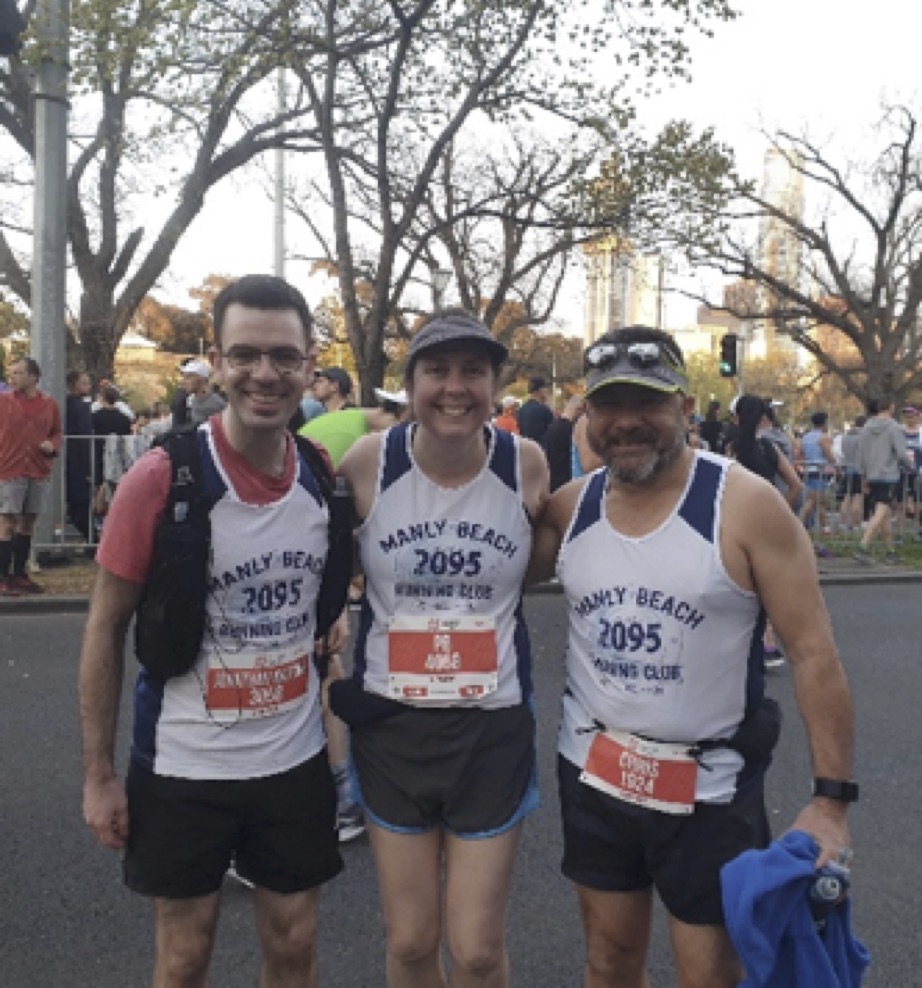 Fast forward to race day and I was feeling pretty nervous. At least I hadn’t slept in and missed the start of the race, or fallen down a flight of stairs and twisted an ankle; my two principal pre-race fears. I felt very lucky to be running with my two MBRC mates, Chris and Nicole (aka PB), who have a wonderful calming influence, which was just what I needed on race day.

As I stood at the start line, I could hear Coldplay’s ‘Viva La Vida’ playing. One of my favourite songs and it really got me pumped for the journey ahead. I knew my  parents, Helen and Christopher, and sister and brother-in-law Clare and Dave and my niece Isla were tracking me on the app and could sense them willing me on.

It was good to get started and try and focus on what I’d learnt when training. It was a beautiful day in Melbourne and I enjoyed running past a lake as the sun blazed down. I remember giggling to myself and thinking “Hehe, I’m actually running a marathon”. I’m sure that didn’t look strange at all! Later we embarked on a long loop back along the coast, which seemed to go on forever.

I felt like most of the race was run in my head. Mentally I found it tough from around 22 to 30km as I had run a long way but knew there was still a long way to go . Then I got a boost when I passed 32km. This was the longest distance I ran when training so from here on in I was running the furthest I’d ever run in my life.

I kept bracing myself for the point at which I would inevitably hit the wall. I imagined that at around the early 30ks I would be shuffling along, barely able to move, until eventually I was helped over the finishing line by a couple of paramedics. In actual fact, at this point, things did start to become noticeably more difficult as muscles felt tighter and my legs felt heavier but I remained confident I could keep going and didn’t feel I needed a break. I continued to run just behind the 4 hour pacer. I tried Kipchoge’s technique of smiling when things got a bit painful but some of the looks I got from people around me told me that this wasn’t appreciated and so I quickly abandoned this strategy.

As we hit the high 30ks I became super aware of making sure I didn’t trip over anyone darting in and out of drinking stations or weaving past me. I felt that if I tripped now it would be race over as I wouldn’t be able to get going again. Finally the MCG came into view and I started to realise that this was actually going to happen. It was an unreal feeling to run into that big stadium and go on a lap of the pitch. As I crossed the finishing line I burst into tears as it hit me what I had just done. A long held dream had finally been achieved and it felt wonderful.A huge thank you goes to: